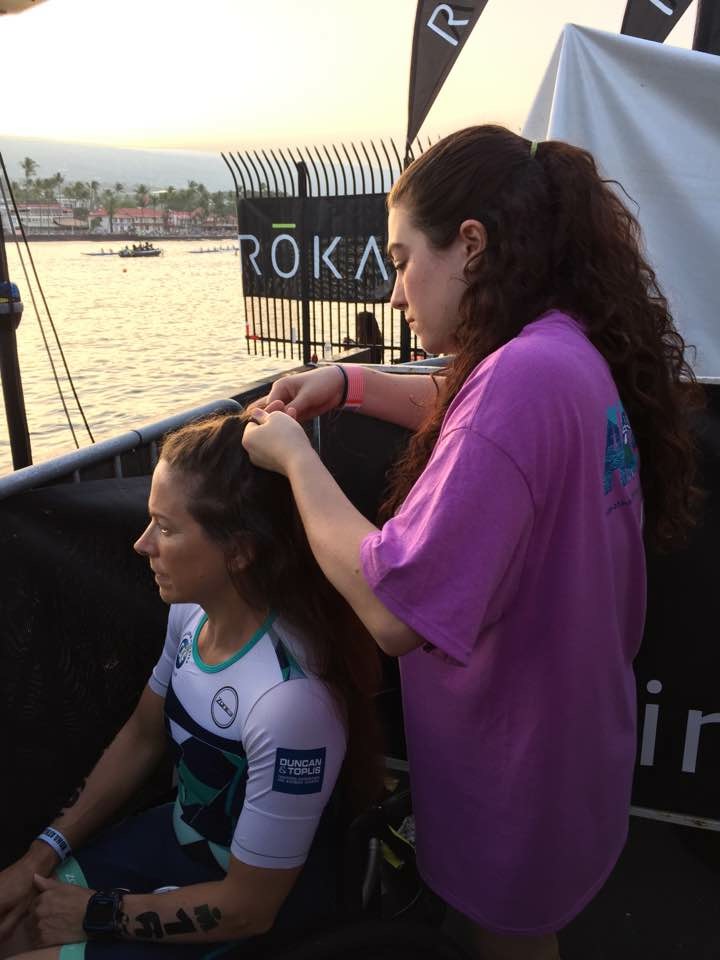 My Ironman journey has been without doubt, arduous. The long months of training outdoors, on the hand bike and race chair, over the last year, in all British weathers, tested my resolve to carry on, at times. Frequently, I have had to fight for the right to space in a public swimming pool lane, when people assumed I was not a ‘proper’ swimmer as I do not use my legs…I’ve followed a strict LCHF diet for six months, training low and aiming to race high, to tap into my fat reserves and not rely on a constant carbohydrate/sugar intake come race day. I lost 4.5kg of body fat in the process, something I’ve struggled with post-menopause.

I’ve also tapped into every resource that I possibly could, for those ‘marginal gains’ and more, that are so important to success. My lovely sponsor Huub Design adapted a 3mm wetsuit into a pair of ‘kick pants’ for me, and TYR donated a top-of-the-range swimskin, plus goggles to use come race day. Duncan and Topliss supplied a brand-new Zone 3 long course Tri-Suit. The University of Lincoln did my Lactate Threshold testing for me, which saved expensive trips to Hannover to see my Coach, Dr. Ralf Lindschulten. I was also able to be tested in my racing wheelchair for the first time on a treadmill, so Ralf could dictate my training better. Sheffield Hallam University Lab For Living, 3-D scanned my wetsuit clad legs and 3-D printed a pair of knee splints for my open water Kona swim. I contacted Ingenium in Illinois who make 3-D printed push gloves for the racing chair to improve my power transfer on the push rims. Sugru offered me more free supplies to mould some new hand cycle grips, so I could avoid blisters cycling 112 miles in the heat of the Queen K Highway, and avoid having to put on cycling gloves in T1. VivoLife sponsored me with Vegan protein and Electrolyte products as I wanted the cleanest products possible that would not affect my sci impaired digestion. I used my Fogarty Products sponsored VW Van to travel to Luxembourg and camp to compete in my qualifying race.

I spent weeks and months exploring avenues for sponsorship, setting up a CrowdFunding campaign, sending out letters to local Companies, applying to Charities, doing talks at Schools and Companies. I did attract new sponsors, but I still relied too heavily on my credit card, getting into serious debt, all to fulfill the dream of competing at the World Championships in Kona, Hawaii.

After all this preparation, I failed to meet the combined Able-bodied swim/T1/bike cut-off of 10:30 hours by less than 1:30 mins. This frustrating and disappointing result was because of my inability to do simple maths due to a neurological impairment acquired during my sci accident in 2005. I’d also not set up my PC8 computer to show the correct time in Hawaii-it was still set on UK time. I simply thought that I had more time. It was a NBC TV crew who first alerted me to the chance that I might not make the cut-off, but I was still about 27.2 km from the finish. I went into TT mode, making a promise to myself that I would bury myself on the bike to meet the cut-off. Everyone I passed shouted, ‘You’re going to make it’ and I rolled into T2 with a smile on my face, only to meet a blockage of officials, camera crews, my Coach and my daughter, Bex. She hugged me, and Ralf held my limp hand as the race official told me I’d missed the cut-off. I simply couldn’t believe that I’d disappointed so many people who had helped me on my Ironman journey. I was devastated that I couldn’t carry on, knowing that my run in my racing wheelchair would have been faster than most of the Age Groupers currently out on the course.

I was very fortunate to have my Coach Ralf over in Kona and he was given permission to do a scientific study of my blood Lactate after each discipline. My actual swim time for 2.4 miles was 01:15: 28 (from my borrowed Garmin 920xt) but my chip had not registered when Ralf and volunteer Nathan had carried me up the steps into the shower and across the timing mat, so they had to carry me back over it… My official time was therefore 01:18:56 and my Lactate suggested that I had gone a little too hard. However, my Lactate after the bike showed I had merely done a long endurance ride, despite my hard effort at the end.

Of course, hindsight is a wonderful thing, and I should have pushed harder on the bike, which I was more than capable of. I kicked myself for virtually stopping at every aid station on the bike course, one every six miles, to douse myself in water to keep cool, as the temperature rose to 39 degrees Celsius and the legendary winds battered me from every direction throughout the course of the day. I’d stopped at Special Needs after the turnaround to ask a volunteer to top up my camelbak, replace one of my drink bottles and pick up my spare nutrition, most of which was not consumed. I didn’t want to throw away my drink tube, so I wound it up and stuffed it under my lap belt. I perhaps stupidly, made sure to give a Shaka sign every time I was given one by volunteers and spectators. I was staying in the moment, but not focusing fully on my race.

Unfortunately, the build-up to race day had not been ideal as both my hand bike and racing wheelchair arrived damaged via American Airlines from Florida, where I’d spent a week acclimatizing to the heat and humidity, in preparation for Kona. The wheel guards on both sides of the race chair were bent and split making it impossible to mount my disk wheels. They were temporarily fixed with a hammer, a block of wood and a metal file. The front mech on my new bike was bent and the Di2 would not shift from large to small chain ring, which I needed to tackle the 1138m of elevation. It took two days to eventually have this repaired after trying numerous bike stores and Exhibitors stands. Ceepo, a sponsor of Laura Siddall, a Pro Athlete who used to reside in Lincolnshire, kindly helped out.

interspersed with tackling bike and race chair repairs, was a keen Media interest in both my back story and my attempt to be only the second woman to complete the Kona course. I attended three interviews in one day, having already given more than four before I’d even left the U.K. I was also keen to represent the Challenged Athlete Foundation as much as possible and took to the stage in the Athlete Village on a Charity Panel and completed a practice swim and photo shoot with other challenged athletes. I’d only arrived in Kona late Monday evening, and race registration, bike racking and a meeting with my Coach needed to be done, as well as some training! Plus my Parents had traveled out to Kona to watch me race and my daughter Bex had come as my carer and support, so some time had to be made to accommodate their wishes too.

Next year, I aim to tackle Kona again-with a good watch and a more consistent effort on the bike! And a Media black-out, if it can be managed. I’d also like to ship all my equipment out to Hawaii, hopeful that this would avoid damage to my adaptive equipment. I’d also like to arrive a week or two earlier, stay in an air-conditioned Condo close to the race start, but away from the melee of Ironman. Of course, I will need new sponsors, and I will need to work hard on retaining my good relationship with my current ones. Just now, I’m not really looking forward to another year of training for Ironman at the moment, but I have unfinished business…