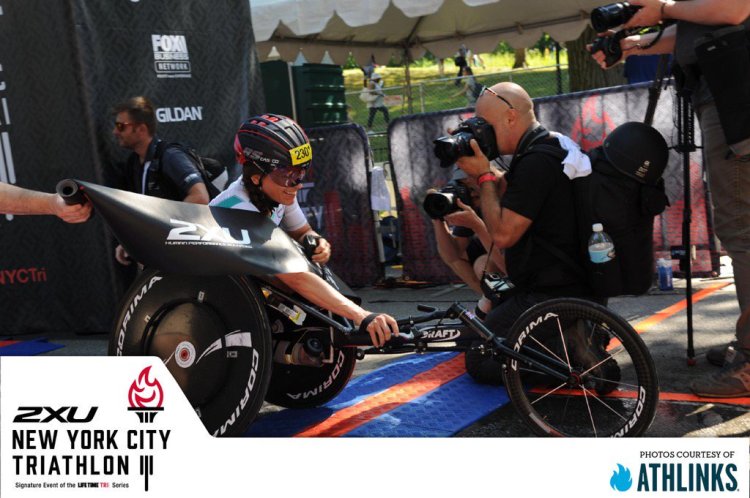 It might seem strange that I would choose to do an Olympic distance Triathlon when I am training for a full distance Ironman, but I love competing in the NYC Triathlon! It hosts the Accenture Challenged Athlete Foundation International Championships, which is the only race, worldwide, that provides a prize purse for Para Triathletes. CAF also provide travel stipends for International athletes to attend, which makes traveling to New York in the summer from the U.K. a little more attractive!

I’ve competed at this race twice before, and been on the Podium both times, being overall female winner in 2016, based on a ‘par’ system for all categories. My friend Carolynn, from Washington State, travelled up on the overnight bus to do crowd support as usual and I had been allocated volunteers Carrie and Brian as PT Handlers for the race.

Everything about the race is superbly organised, from the briefings, road closures and volunteers. However, transition, as always, is a logistical nightmare, with two pieces of adaptive equipment to juggle in a small allocated space, grass with bumpy matting, steep inclines out, gravel, tight corners and lots of people!

They say knowledge is power, however, and since I’m already aware of potential problems, I knew what to expect on race day. I’d also had a chance to cycle and do a practice run in Central Park having arrived a few days earlier this year and staying at a more central Hotel. The weather had been unexpectedly wet and windy though, and I had to wash, plus try to dry, my hand cycle cushion in my tiny Hotel bathroom the day before my race!

I really enjoyed my race, I had lots of support for me as a CAF athlete-I’m proud to have their logo on both my bike and my Tri-suit-from both spectators and other athletes. I managed the fastest swim of all the challenged athletes in my wonderful Huub Design 3mm wetsuit, ‘chick’d’ another male hand cyclist out on the bike course, and had an incident free run in Central Park, thanks to a superb lead cyclist clearing the way.

I was really pleased to set a new course record for PT1 female athletes, and come overall first place female for the second year running! My road to Kona seemed to be heading in the right direction…