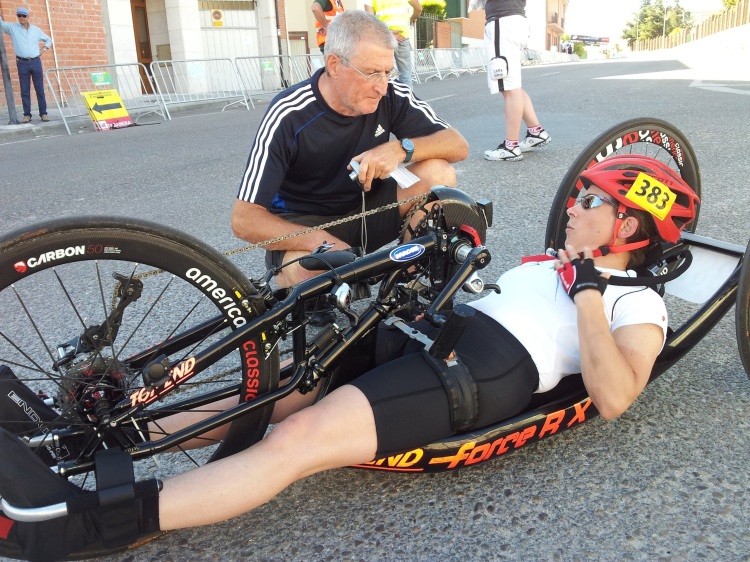 Pep talk before the TT

It was with trepidation that I travelled to Spain to compete in another UCI Para-cycling World Cup this time against the worlds top female hand cyclists, all of whom had competed in London 2012 Paralympics. To be able to compete Internationally in Para-cycling required me classified again and my appointment had been allocated a few days prior to the competition which meant I had time to do a few training rides in the sunshine.

Unfortunately, I didn’t take into account the topography of the area where the official Hotel was situated and my ‘easy’ ride turned into a bit of a nightmare, especially when my gears failed on the long climb back. A UCI official Jose Aurelio, kindly stopped after seeing me stuck on the side of the road. I was fortunate that the South African Team Mechanic was able to fix the problem.

As I was classed as an ‘Independent’ and not part of the official funded GB team, I relied on the organised transport to get me to the race site, about an hour away. The Time Trial was a flat and fast out and back course with one steep bridge. I was seeded first as the slowest competitor and we set off down the start ramp in two minute intervals. It was hard to gauge my effort with nobody to chase down in front, but Rachel Morris overtook me after the halfway point, with the others swiftly following. My lack of an opportunity to navigate the course beforehand meant I was unprepared for where the turnaround was and how to tackle it.

Fortunately, I have met Mark Rohan, an Irish Paralympian, at other races, and his friends Anne and David Hadfield where only too happy to drive me round the course for the next day’s Road race course so I was more prepared for the tight turns, speed bumps and steep cobbled section repeated over three laps totalling 36km.

The Road Race was a bunched start and I had hoped to be near to Rachel to at least draft for the first of three laps, but I was placed way back in the pack. I had not realised the mixed category and gender race meant I could draft anyone, as usually we can only draft within our own categories, indicated by helmet colours, and did the entire race as a solo time trial.

I finished fifth in both the TT and RR, and was pleasantly surprised to be ranked joint first in the UCI world rankings afterwards!