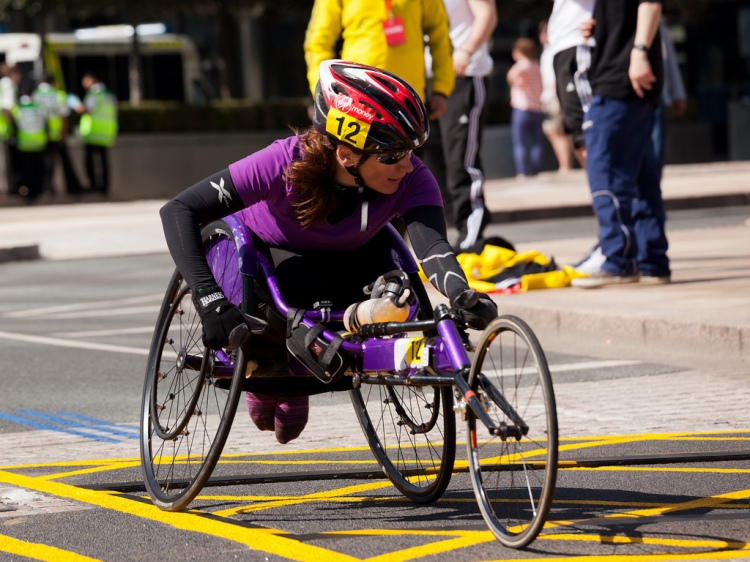 Making the decision to run a marathon, only two years after first squeezing myself into a race chair, and taking part in two Half marathons, was not easy. I knew it would involve full commitment to a training regime over the winter and one of my disciplines would have to take a back seat for six months. A personal ambition of mine is to compete at the World Triathlon Championships in Kona in the future, so an attempt at the distance seemed like a good idea.

I travelled down to London with my borrowed kneeler racing chair, which Rick Hoskins at Stockport Harriers had kindly lent me instead of my very basic sitting chair with small pushrims and 650 wheels. After registration I caught up with friends and gossip over a buffet dinner provided by the organisers.

We travelled to the race start next morning and mingled with the Elite wheelchair racers. I chatted with Ernst van Dyk and said hello to Heinz Frei, who I hugely admire, then it was time to warm up, line up at the start and wait for the gun.

I knew I would have no-one to draft and it would be a solo effort, but I still set off at a rate of knots to try and latch on to someone. The organisers had said we would be pulled off the course if we didn’t reach the 11 mile mark by 1:20hrs. Paranoid about having a DNF, I did a 6 minute PB of 1:22:47 by 13 miles and paid for it in the second half.

I was sick three times, felt dizzy and my arms refused to work. I had hit the proverbial ‘wall’…but with wheelchair racing, there is no walking to recover, as the chair needs to be constantly propelled by the arms. It is at this stage that you learn the most about your inner strength and willpower to finish.

The crowds were absolutely amazing all round the course as thousands lined the route and created a huge wall of noise from both sides. At times I wanted to block out the noise and the few tunnels and underpasses on the course gave some relief. Then I heard individual voices-‘You rock!’, ‘Go purple lady!’, ‘Don’t stop!’ ‘You can do this!’- and regained some strength after a volunteer handed me a gel.

I finished the race in 3:13:40, to rousing clapping from the wheelies who had already finished, something which was better than any prize I’ve ever received.